The autumn in Almunecar is really warm compared to the Finnish one. In October you could still swim in the sea and the temperature was a bit above 20 degrees. Now that we are in November, it’s a bit colder, around 18 degrees, but the days are still quite warm and the sun is usually shining. There have been a few rainy days as well. When it has been raining, Isla always wants to go outside to splash in the small puddles. During October and November we had a few occasions to celebrate, so this post is all about that.

The kids had a day of from school on the last day of October, the eve of Halloween, so Luna had her Halloween at school the day before the actual eve. The kids could wear costumes. Luna was a pumpkin princess and it was important to have some specific make-up as well. The kids could have made some Halloween decorations or crafts at home which were then put up on the walls at school. They also had a special exhibition for the parents, we could visit the school during an hour. The crafts there were breathtaking! I mean, the kids really put an effort on doing those at home with their parents. They also had a dance performance in the school yard, Michael Jackson’s Thriller.

In the evening we went to wander around the streets of Almunecar. We had seen an ad about a party for the kids, so we went there. Unfortunately it wasn’t really for us because you’d have had to leave your kids alone there (no parents allowed). Obviously our kids didn’t want to go. Then we went to the Town Hall where there was a path of horror and a bouncy castle. There were a lot of people, some of them wearing costumes. The path, however, was too terrifying for us, so then we just went home.

Halloween isn’t yet really popular here, the kids don’t go much from door to door, but I think the tradition is becoming more and more popular year after year, like in Finland. 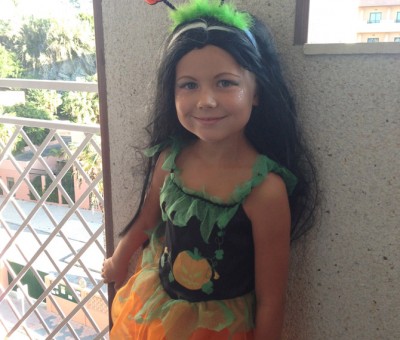 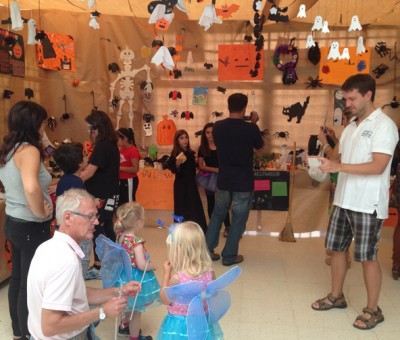 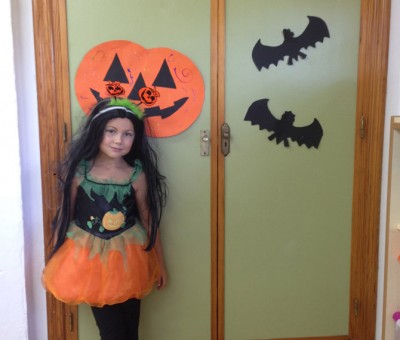 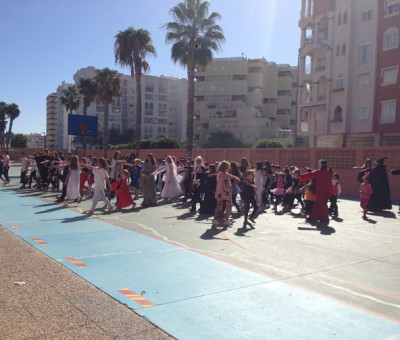 On October 8th we had our 10th anniversary, that is to say, we have been married for ten whole years! How the time flies! We all went to eat to Nerja, a bigger town maybe 20 minutes from Almunecar. We walked a bit on the patio and took some photos. Then we decided to go for this Mexican restaurant nearby. We had some burritos and nachos and liked it. And we got to wear sombreros:)

In the beginning of November we had the possibility to go somewhere just the two of us for the weekend because my parents could take care of the kids. Ok, so for a long time (before we moved to Spain) I thought we’d spend our tenth anniversary somewhere warm far away (which Spain kind of is..), like in Egypt where we went for our honeymoon and that we’d be able to be there at least a week…but things change the circumstances being what they are. At this point it just wasn’t possible. My parents couldn’t have taken care of the children for the whole week. At least not here in Spain. And for the children, I don’t know how they would have taken it. It would have changed their daily routines and for Luna it’d been difficult with her homework (which is in Spanish). So, we were grateful for what we got, a weekend in Malaga.

So we had booked a hotel called Monte Malaga near the railway station because we knew it was near some big shopping centres with cinemas. For me it was also crucial that there was a sauna at the hotel. We got there on Friday evening and first went to eat at Taco Bell which has these cheap but tasty tacos and tortillas. Then we searched for a cinema which would show movies in English. It turned out there weren’t any in English, but we agreed on to watch one in Spanish anyway. So we had a good time with Mathew McConaughey and Anne Hathaway in space even though some parts were a bit hard to understand because of the scientific language. After the movie we took some food from Taco Bell with us, it was that good.

On Saturday we went after the breakfast to the spa area. Unfortunately the saunas weren’t on, but we swam a bit in the big pool. We did some Christmas shopping at Disney Store which we found at a shopping centre quite near us. Our kids would have gone crazy in that store! Elsas and Annas everywhere. I tried shopping for shoes but didn’t find any suitable. We ate in an Italian restaurant and in an American restaurant (really good!). In the evening we watched Dracula in Spanish. For me, it was easier to understand than the last one.

On Sunday right after waking up we went to the spa area again. The saunas were on this time and there wasn’t nobody else there so I managed to sneak to the men’s sauna with Antti. Oh, how I’d been missing a good sauna! Then we had some breakfast at a cafe before heading home. I kind of forgot to take any photos of the trip. It was really nice to spend some time without the kids (it had been a long time). 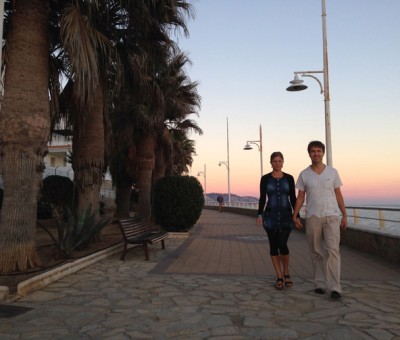 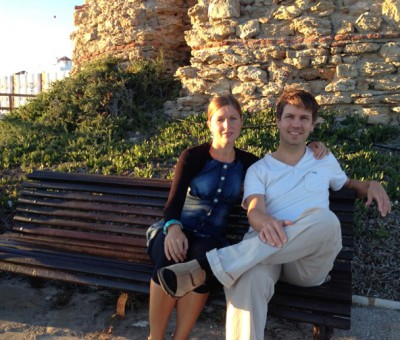 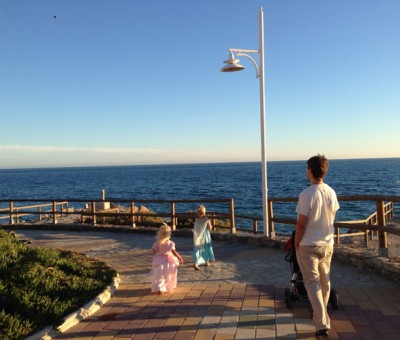 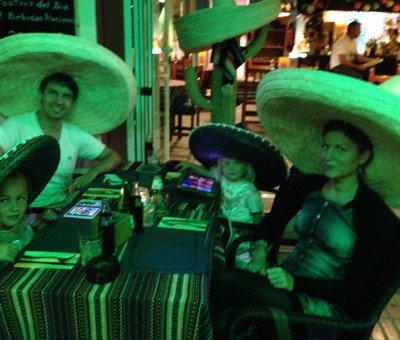 Isla turned three years on 10th of November. When Isla’s and Luna’s cousins were here visiting us, we had a small party for her; just eating some cake and she also got a present from them. On her real birthday day we had another party just us and my parents. We sang Happy Birthday and she got to blow the candles. The cake was (of course) Frozen with pictures of Anna and Elsa. Isla was happy with her presents. She got a small pony castle with accessories, pencils and paper, Littlest Pets with accessories and a Tinker Bell doll.

Our three-year-old is very determined when she gets in the mood. She knows what she wants and when she wants it. We’ve been trying potty training for ages now, some days with better success than others. We hope to get her in the school soon where she could play with kids her age. Sometimes it’s a bit boring for her to spend the whole day with me (and I get easily bored when playing…) 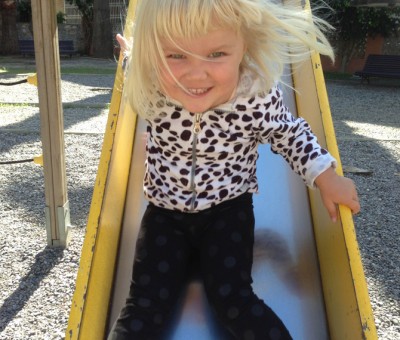 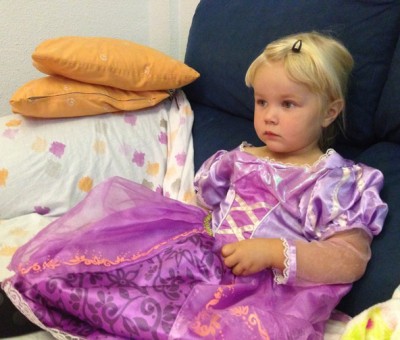 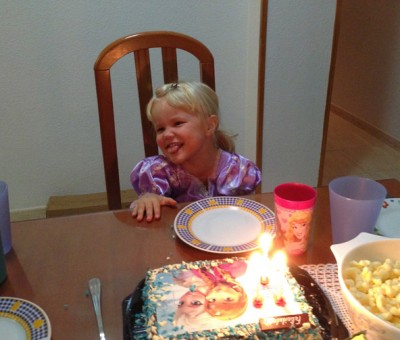 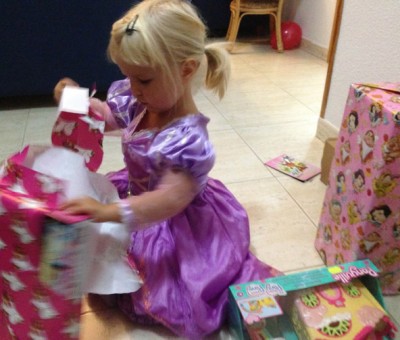