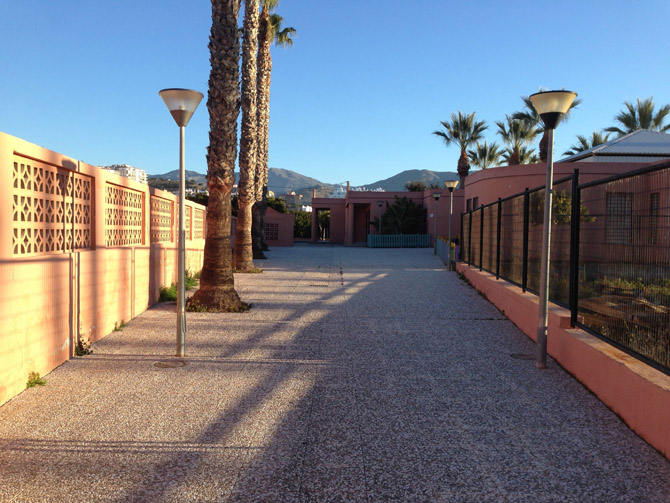 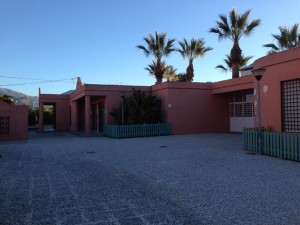 Isla just started school a few weeks ago, so I’ve been able to compare the school or daycare systems in Finland and in Spain. At first, Isla was very eager to start school and during the first week didn’t even cry when I’ve left her there. At the end of the first week we all got a reminder of how how easily kids catch all the diseases when starting school. On Saturday, after the first school week, Isla started throwing up and did it all through the night. A few days after that it was Antti’s and my turn. Luckily the bug was over in two days and Isla could go back to school, but this time it was harder for her and she really didn’t want to. She protested and cried at home before we left and a bit at school as well. The biggest problem for her at school (in addition to the language) is that she doesn’t want to use the toilet there at all. She has used it now twice when I’ve been there with her, but doesn’t want to go on her own, so she can’t spend the whole day there yet (they have this small toilet seat, not a potty). It has been nice hearing her talk a little Spanish, even though it has been her own Spanish; some correct words here and there, but mostly bubbling. So, here are my comparisons:

- Kids go to daycare at the age of 0 to 5 years, preschool the year they turn 6, school the year they turn 7
- Public daycare costs around 250 euros a child per month (this is the largest amount; depends on the family income)
- Around 16 kids in a group, 4 caretakers
- Homelike care: kids learn to do basic daily stuff with the help of a nanny
- Kids take a nap during the day (two hours)
- Meals: breakfast, lunch, snacks are provided
- All the learning materials are free
- Daycare between around 7-17 o’clock
- Kids get acquainted with the daycare with a parent, spending a few hours at a time there first

- Kids go to daycare at the age of 0 to 2 years, school the year they turn 3 (voluntary), obligatory school the year they turn 6
- Public daycare costs, but school is free
- Around 20 kids in a group, 1 teacher
- Kids are expected to be independent: they use the toilet (no diapers at school), wash their hands, put their clothes on all by themselves
- Kids don’t take naps
- Kids study: they have schoolbooks and learn numbers and letters
- You have to bring your own food
- You have to buy the schoolbooks and other equipment for the child (even toilet paper and water!)
- School between 9-14, activities after that until 17 o’clock (voluntary)
- Kids start straight ahead by themselves, no parents allowed, fewer hours at first 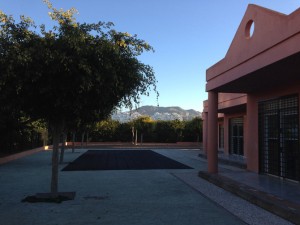 In Finland Isla’s daycare had this big yard with swings, monkey bars, sandboxes and slides. Here the children have just a yard where they can run. Sometimes I’ve seen some girl grabbing Isla’s hand and taking her somewhere, so the kids are a lot more straightforward here and like to play even with the new pupils. Isla has been maybe a bit reserved at first, like we Finns usually are. One day when I came to fetch Isla last week they were watching TV while eating. This would be impossible in Finland! They would never let the kids do that, at least not when eating. I think the parents would be pressing charges right away if that happened. Well, not in Spain.

I’ve been asking Isla what they’ve done at school. She’s said they’ve drawn some pictures and watched TV. Isla has been a bit disappointed because they haven’t been playing (with toys). In Finland they used to play a lot, usually in smaller groups. She’s also eagerly waiting for the time they’ll use their school books or mould. Let’s see if that will happen soon:) Tomorrow they are going to see this theatre at the culture house. I’m crossing my fingers that Isla gets there safe with the group and doesn’t get into an accident on the way or something…

The fact that there’s only one teacher in a group has a great effect on the pupils. At the age of two to three the kids have to be really truly independent. The teacher has her hands full with that large a group of kids, so it’s understandable that she can’t supervise that everybody goes to pee regularly or that everybody puts their jacket on when they go outside. We still have to train Isla a lot to be as independent in these things as the Spanish kids are. Now what I’ve done is gone to the bathroom every day with her there before she goes home and talked about that she has to put her jacket on when she goes outside. 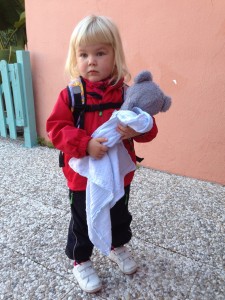 Another thing which is really different from Finland is the teacher’s attitude towards crying. In Finland when a child cries when her/his parent is leaving, a nanny takes her on her lap and then tries to get the child’s mind of by doing something with her. Here, when a child starts to cry, the teacher shakes her head and goes on doing her things. Once again, I get that she can’t take every crying child to her lap being alone with 20 kids…but the attitude towards crying is so cold and indifferent, at least when you compare this to how it was done in Finland. In Finland the nannies also always told us how the day had gone when we came to fetch Isla, but here usually not, if you don’t go and ask her.

So right now I’m voting for Finland when it comes to the daycare/school system of the three year olds. Let’s see if I’ll change my mind when we get a bit more acquainted with the system here.