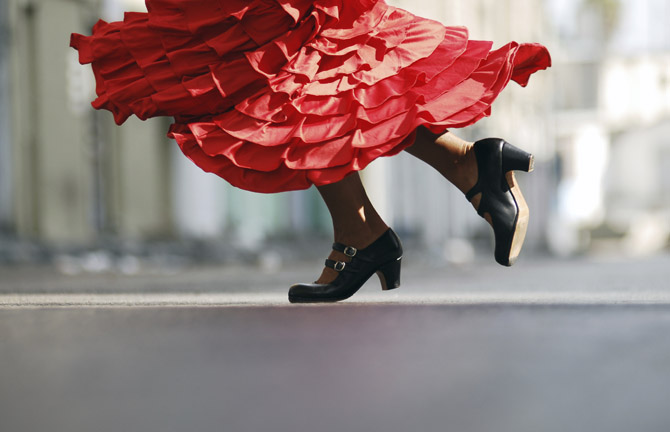 If you live in Spain, you are familiar with flamenco. It is played, sung and danced in all the major festivities. It’s like the Spanish national dance. Even if you don’t know how to dance it, you put your flamenco dress on when there’s a celebration. There are also live flamenco shows in the restaurants and bars in the evenings. We haven’t seen one yet, but I’d definitely like to. 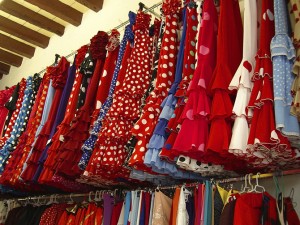 Luna started dancing flamenco in April. She’d been longing to do something physical for a while and this seemed to be a good opportunity. There are several dance schools in Almunecar and La Herradura which teach flamenco for the kids. While we were at the park in La Herradura we heard that there’s a flamenco class for the kids just beside it. So I went there with Luna to watch. Luna really liked it and wanted to participate. At first I thought that she’ll regret it because she hadn’t danced it before and the steps seemed somewhat challenging. All the other girls (and a boy) in the group had danced it a lot longer. But it was ok. She didn’t mind the challenge and caught up pretty well. Then all of a sudden there was no class. The teacher didn’t show up anymore and neither did the other kids. We didn’t have her contact info, so we couldn’t call her. 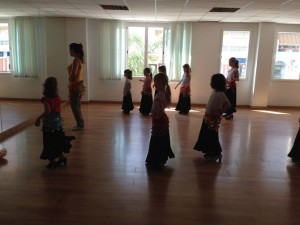 We heard about this other group for the kids at Centro Civico, close to the park as well. So Luna went there to try and liked it. They did several different dances and used scarves and special skirts with jingle bells on them. Luna said she didn’t like doing the hand movements and claps that much, but the feet work she liked. Sometimes I would see her her practising at home, doing the steps, counting and clapping, even just before falling asleep.

I also took a class myself in Almunecar. Once again, finding a place where they have classes for adults was a challenge, because nothing is on the net. So I went asking around. It turned out that the adult classes here usually start quite late, like around 9-10 in the evening when most of the people get off work. So that was a bit too late for me. I managed to find a group practising at Mercado municipal at 8.30 once a week, 6 adults of all ages. They were already practising for the gala at the end of June when I started taking the class in March. So it was a bit hard for me to catch up at first since they already had a ready-made dance, but were mostly just practising to memorise it. I hadn’t danced flamenco before, or not even anything with high heels, so I needed a lot of technical practise too. 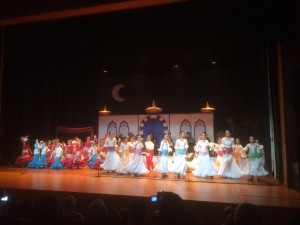 Kids dancing at the gala.

The teacher suggested that I took a few private classes with her, 20 euros per class. I liked the idea and so I went to her house to practise where she had a small studio for dancing and recording music (his husband is a musician). After three classes I already knew the dance quite well and was able to remember the steps. So after that practising with the group began a lot more meaningful to me.

In addition to the dancing it was nice to be around Spanish people and hear them talk Spanish in a normal space, that is to say fast. There was usually live music in class, the teacher’s husband playing the guitar. Sometimes the teacher and her husband would start to argue about something and I couldn’t understand the half of it. Once again it amazes me how fast the Spanish people are able to talk… 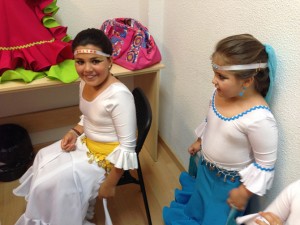 Some girls waiting for the gala to start.

The classes here are really cheap, 15-20 euros a month. In Finland it was around 50 euros a month if you took the class for the whole term. Here you pay in cash directly to the teacher. It’s just the teacher’s business and not a part of a larger system, at least not the payments. Of course for flamenco you had to buy shoes and a skirt to be able to practise it well. And for the shows there are specific dresses which can cost you a lot of money. My skirt and blouse plus other accessories cost 90 euros altogether.

Even though the classes were supposed to start at 8.30, they always started a bit later. It 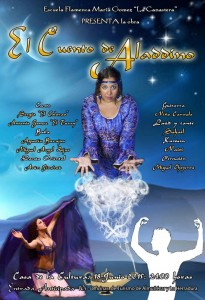 The poster of the gala.

was the same with Luna’s classes. I think it’s the Spanish style. When the gala was coming up, all of a sudden the people in the class wanted to practise more (without the teacher) and organised a time to practice. Usually they agreed to practise a few hours before the practise, which for me as a Finn was a bit weird. Couldn’t they agree to do it a day before? A few days before the gala we had marathon practises at Casa de la cultura with all the dancers and musicians. There were professional dancers and musicians from bigger cities. At first I thought that why in earth do we need to spend three days practising 4 hours at Casa de la cultura when our dance was just a few minutes long, but then I understood…It wasn’t just separate dances put together. It really amazed me how in three days the gala was ready. We had just been practising our dance before, but now all of a sudden it was a show with professionals dancing WITH us and an orchestra playing our dance. So applause to the teacher, she did a great job! 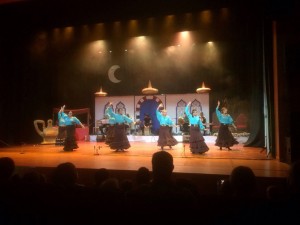 My group at the gala.

I will definitely continue dancing flamenco when the classes start again in the autumn. In addition I’d like to take up ballet again, or some other dance style. Luna is considering starting rhythmic gymnastics which is really popular around here.
Author: admin
Categories: Almunecar, Dancing, Exercise, kids, La Herradura, Spain