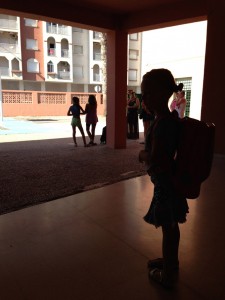 The school system in Spain is a bit different from the Finnish one. Here the kids can start pre-school the year they turn three and it’s free. In Finland we paid about 250 euros a month for one kid in the daycare and the pre-school in Finland was one year long at the age of five to six years. Isla hasn’t started pre-school yet, since we’re getting her first rid of her diapers and the dummy. The year the kid turns six, s/he’ll start in educacion primaria (primary school), which is obligatory, and s/he’ll finish it at the age of 12. Luna was born on the last day of December, so according her age she’d be in the second grade, but because there wasn’t any space left and because she doesn’t know Spanish they put her in the first grade. The year the kid turns 12, s/he’ll start in educacion secundaria (junior high), the same way it’s in Finland. After that, at the age of 16, the kid can choose to go to bachillerato (high school) or formacion profesional (vocational school), exactly like in Finland. The school year starts in the middle of September and ends at the end of June, around the 24th. There’s no autumn holiday, like in Finland, but the other holidays are more or less the same as in Finland. 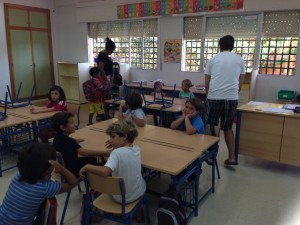 Luna goes to a school called La Noria. The school is just opposite our home. I don’t know how the registration is formally done here, but we just went to the school in June and asked for a place for her. At first the school secretary said there’s no room and we were really sad, because we would have to put her in a school somewhere else in Almunecar, a few kilometres from our home. We had also heard some good experiences about the school from this American family living in Almunecar. However, the secretary asked us to come back the following day and said she would talk to the principal. When we came back the situation had changed, there was room in the first grade and we were so happy.

So we got this pile of paper to fill in for the school. I have to say I managed it quite well with my basic Spanish skills. We also had to provide some papers of our own, like the birth certificate, the vaccination certificate, passport copies and proof of marriage. They didn’t insist these in Spanish, the Finnish ones were enough. Then we got this list of books, which we had to take to a book store where they would order the books. It took a few weeks and we didn’t have to pay anything for them. Then on the first school day in September Luna came with another list of necessities that we would have to get during the first week. The list included work books, paper, different kind of pencils, rubbers, sharpeners, a big plastic box and hand towels to mention a few. For those we had to pay for ourselves. All of these, including the pens, had to have the pupil’s name on them. 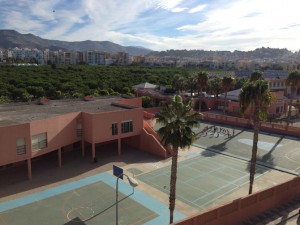 Luna goes to school from 9 to 14. The parents have to bring the kids to school and also fetch them. The school day starts in the yard, where the pupils go to queues according to their grade. Luna’s classroom teacher is a young woman. I guess the kids spend most of their lessons with her, but Luna says that they switch teachers quite a lot. They have a different teacher in P.E., Music, Environmental Studies and English. The kids have only one break, from 11.30 to 12 and during the break they also have to eat their packed lunch (brought from home). I’m really wondering how both the pupils and the teachers manage with only one short break during the whole day. I used to teach in Finnish junior high and even two classes in a row was really painful…I mean, the concentration on the subject was poor. Maybe they have some more advanced teaching methods in Spain then… 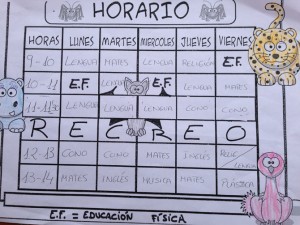 Luna’s schedule consists of Spanish, P.E., Environmental Studies, Maths, Music, English, Religion and Arts. When most of the kids have Religion, Luna has something called “Alternative” since she’s not catholic. I have no idea what they’ll do in Alternative, Luna said they did some colouring pictures last time. Luna is also going to have some additional tutoring in Spanish which is going to take some time from the normal classes. After the school the kids can choose to have lunch (costs 4,50/day) and in October start after school activities, such as Crafts, Theatre, English and Sports/Dance. We’ve signed up Luna for Crafts for now, but she’s also shown some interest in the other subjects, so we’ll see how it goes and if she wants more later on. Some of the activities are free, some have a monthly cost around 14 euros.

Luna has now been to school for a week. She really likes the P.E. classes and the breaks. Most of the other stuff is boring according to her because she doesn’t understand what the teacher is saying. The exercises have been really easy for her until now, she says they’ve done the same kind in the Finnish pre-school. So the language problem hasn’t really shown yet. This week they started using their school books. Luna has made friends with a Danish girl in her class who doesn’t speak any Spanish. She’s also been playing tag with some bigger kids during the breaks.