When we moved to Spain, we had this goal to live a healthier life than in Finland. That is to say, exercise more and eat healthier food. Here in Spain the weather conditions aren’t a barrier for us, so we’ll be able to exercise more freely all year around. Also I’ve had a few pregnancy kilos weighing on my waist that I haven’t been able to get rid of all these years (it has been seven years since my first pregnancy). Antti has always been very aware of my looks and notices better than I if I gain or lose some kilos, so I have never really needed a scale. 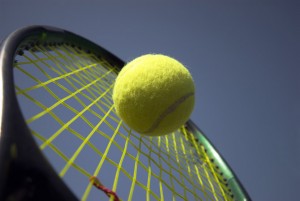 When we lived in Finland I used to exercise 3-4 times a week. I had regular dance lessons two times a week, ballet and jazz. In addition to that I usually went jogging. Sometimes I ran alone, but quite usually we went as a family (when there wasn’t snow). I used to push Isla’s prams and Antti took care of Luna on her bicycle. When the winter came, the running eagerness sunk quite a lot. So if the weather was bad, I used my cross-trainer for the exercise instead. A few winters I tried cross-country skiing, but I didn’t really like it that much. We had this ski track right beside our house, so I had to give it a try. In the summers we sometimes played tennis, but that was always harder to organise since we needed a babysitter.

Here in Spain I have exercised 5-6 times a week. It has usually been running and fitness training. We have a tennis court in our backyard but we haven’t been able to use it yet, because of Antti’s lower leg problem. He hasn’t been able to exercise for two months, but it’s finally getting better. In June we tried running as a family, but the patio was too crowded, so it was more dodging people and walking than actually running, so we gave that up. Maybe when the winter comes, it’ll be possible, since there aren’t too many tourists around. The terrain in Finland is better for running than here (in the summer), in Finland I even used to run some parts of the route in the forest. Here you don’t have many choices, the beach route or running up the hill all the way. But I’m not complaining because here the weather for running is so much better. I got this new walkman as a birthday present from Antti, so running with J-LO or Adam Levine has been nice:) 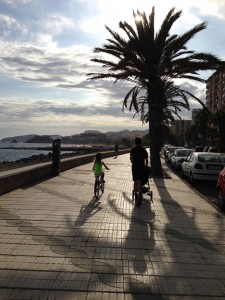 For fitness training I’ve been using this app called Instant Fitness. I’ve enjoyed using it. There are complete fitness programs for whatever part of your body you want to exercise. These are around 10 minutes long. You can choose the level as well (easy, medium, hard). I’ve liked the programs, but you can also do just single exercises and choose them by yourself. There is a Chinese guy showing the exercises and doing them along with you, so it’s like exercising with somebody who is showing you how to do it and encouraging you at the same time.

Of course I would like to start dancing again, but right now we kind of have a lot on our plate already with Luna starting her school and me individual Spanish lessons next week. I’d like to try flamenco some time since that is very popular here. I know that there’s a dance school in Almunecar, so maybe I’ll start asking around when things calm down a bit. There’s also the possibility to go snowboarding in the winter, since Sierra Nevada is only an hour’s drive from here. That’s the only winter sport I really like, but it requires some good company, alone it’s so boring to sit in a ski lift.

For some time I used to write down the exercises I did during the week (I used Heiaheia.com) and I think I should start using it again. It really helps you to see how much progress you’ve made during the whole year.

Ok, so for me eating healthy has always been more of a challenge than exercising, at least during the whole time I’ve been married. During the week it has been quite easy to keep my hands of delicacies, but when the weekend comes, that’s when it gets hard…all the pizzas, ice-cream and candy waiting for me to grab. When the kids go to sleep, we usually spend some quality time watching our favourite series or a movie and eating well. A few years ago Antti even invented this term “Pizza Wednesday”, so it kind of got out of our hands for a while, since Wednesday nights were also dedicated to snacking.

The past few years in Finland we used to eat out twice a week. Usually it was in this Chinese restaurant or Hesburger (Finnish Mc Donald’s) right before doing our groceries. We ate lunch at work and the kids at daycare, so there were only some days a week we had to prepare a proper meal at home. We don’t like cooking much, so the meals were usually something easy to do: meatballs, chicken or salmon with rice, potatoes or pasta. Sometimes we had salad (tuna or chicken). Our all time favourite snack was cucumber, carrots, tomatoes and crisps dipped in seasoned sour cream (dipattavat in Finnish). This we could eat many times a week in the evening when the kids were sleeping.

Now that we live in Spain, we’ve tried to eat healthier. We’ve replaced the pasta/potatoes/rice with salad on the side. In addition to that, we’ve tried some new recipies, chicken or fish. We used an app called the Food Network for the recipies. Langostinos (prawns) are really cheap here, so we’ve eaten a lot of those. The kids also like grilled anchovies and you can get them for a few euros in a restaurant. We’ve been eating out a lot, it’s been kind of holidays for us. Here the price for eating out for a family of four can be half of what it was in Finland. In our favourite Chinese we eat for around 20 euros. Many restaurants serve “Menu del dia” (Menu of the day) quite cheap. Yesterday we ate Menu del dia for two (enough for all of us) and it cost 33 euros. We’ve tried to leave the snacking for the weekends, but it hasn’t always worked as well as it should have. We have to practice more self-discipline…

Author: admin
Categories: Almunecar, Eating, Exercise
There is 1 comment for this article