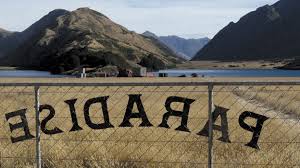 This post will be about what we (me and Antti) usually do between 22 and 24 o’clock…that is to say spend some quality time watching some interesting TV series. We’ve been using mostly Netflix and Hbonordic as our sources, but we’ve also had some DVDs or Blurays. We like series that have a continuing plot throughout the whole season, so that has somewhat limited our choices. We both like excitement, so we’ve mostly been watching thrillers or detective stories. Sometimes we’ve chosen something more “light”, like drama or comedy. 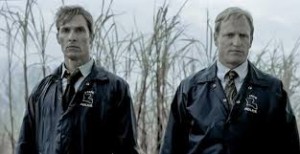 True detective is, like the name states, a detective story, looking into two policemen’s life while and after their hunt for a serial killer. Matthew MacGonaughey does an excellent role as a serious detective, not the role he used to have in his former works. Woody Harrelson with his clear blue eyes plays really well too. Actually, the most captivating thing about the series are the profiles of these two people- their personal life and feelings while working on something that terrifying. The plot is good too, you just cannot guess what is going to happen next, but it will most definitely be something thrilling. I heard they’re making another season of True Detective and we’re so looking forward to it. 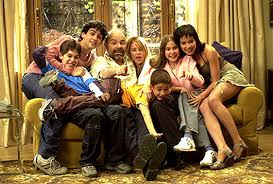 We started watching Los Serrano because we wanted to hear some Spanish before our move to Spain, so I got this complete pack of all the seasons as a Christmas present from Antti. There are many season and we still haven’t watched all of them. Los Serrano has been kind of on and off for us, there have been times we’ve watched it a lot but also times when we’ve had enough of it. It tells about this Spanish blended family and their relationships. It’s mostly comedy with some heart-breaking drama. The main characters are interesting, but there are also some minor characters that are mostly irritating (I guess that’s the point). Sometimes you can guess what’s going to happen next, and like many other love stories quite a lot of this series is based on a young couple who just cannot ever really be together. However, you can count on having a fun time with Los Serrano!

True Blood is also a series of many seasons. At first when we started watching it, we didn’t like it at all, but after maybe five episodes we just couldn’t get enough of it. True Blood is based on the books of Charlaine Harris. It tells about the relationships between humans, vampires, werewolves, shape shifters and fairies living in this small town called Bon Temps. The main character is a telepathic waitress Sookie Stackhouse who meets a vampire, Bill Compton and of course they fall in love, but nothing is so simple between all these creatures, so whatever can happen when we follow their lives more closely. There are fights, a lot of blood, mind-games and really peculiar things happening all the time. 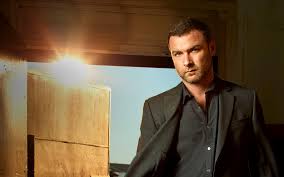 This was Antti’s choice, I believe. It tells about a man (Ray) who handles all the rich people’s dirty work, like threatening and blackmailing, and some killing too. As he leads a dangerous life, his family is never really safe. In addition to that Ray has many twists and turns in his personal relationships, one of them being unfaithful to his wife who he loves. Ray despises his dad who he’d rather have in prison. Ray Donovan is certainly exciting and full of action. Each episode makes you want to watch the next one. 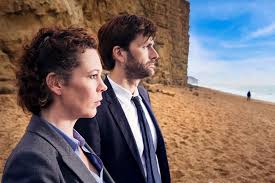 A young boy is killed. He jumped of a cliff and let his parents with a terrible longing. But was it a suicide after all? Two detectives who want to find out what happened are the main characters in this series. So, this is a detective story as well, but it tells also a lot about the tight-knitted society of Broadchurch, a small town in Great Britain. All the killed boy’s family members and close ones are on the spotlight. I liked this maybe a bit more than Ray Donovan, because it took a closer look on how people were feeling instead of all the action.

Top of the Lake 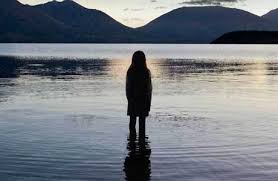 The plot of this one is really similar to that of Broadchurch. A 12-year-old pregnant girl tries to drown herself in a lake in New Zeeland. Shortly after this she disappears. Detective Robin Griffin, who used to live in the same city, is called to find out what has happened. As the investigation proceeds and the past of Robin comes to hunt her, Robin finds herself involved in the secrets of the small town. The plot in this series is unpredictable and the views of New Zealand are absolute stunning. It’s a pity that it’s only a mini series. 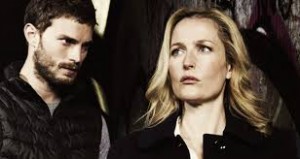 Once again, a detective series. There’s a serial killer on the loose. He kills successful women in their thirties by strangling them. The killer kind of reminds me of Dexter, if you know that series. He has a normal life, but this dark part of his life too. Superintendent Stella Gibson, played by Gillian Anderson, is the one to called out to catch the killer. The series also take a look on her personal life. Anderson looks a lot better and even younger in the Fall if you compare to the X-files which I used to watch 15 years ago. Her role, though, is quite similar to that in the X-files. The series was addictive, but the end came unexpectedly fast and was left hanging. We’ve only seen the first season, so I guess it will continue where it was left. 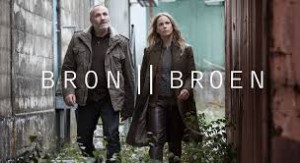 Bron is a Swedish/Danish detective series. Even though it happens in these dark and cold northern countries where the sky is always cloudy, it is really well-done. We’ve seen two seasons and each one has a case the detectives (Martin Rohde and Saga Noren) are trying to solve. The profiles of these two detectives and their personal lives are intriguing. There’s some humour embedded in the role of the female detective, in the way she works and behaves. I also really liked that they used the two languages in the series simultaneously, so I could brush up my Swedish and Danish skills. In comparison to the Fall, this didn’t have a sudden end, vice versa. There were a few times I thought the season would end, but then something unexpected came up. It was a pity though when it ended for real. I truly recommend this one!

At the moment we’re watching The Affair which has had a lot more romance than the previous ones we’ve watched. We’re already hooked.