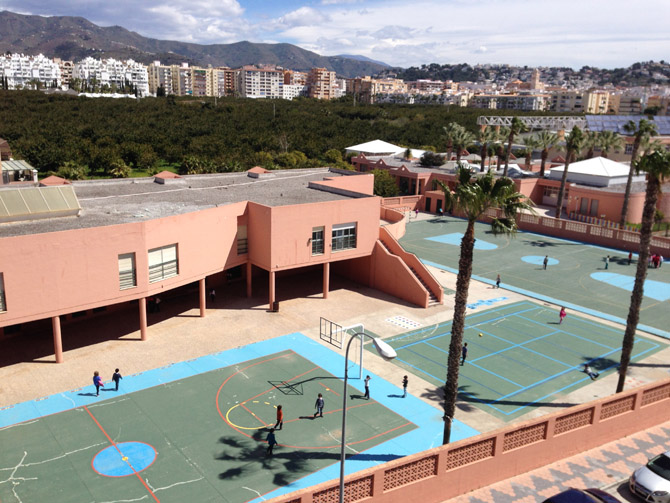 Here in Spain the school year is divided into three semesters, not into two, like in Finland. So the kids are evaluated three times a year too. The parents fetch the school reports, so the teacher has the possibility to explain the parents what grades the pupil got and why. This is different from the Finnish system where the pupils get the repots on the last day before the holidays. The second trimester is over now, so it’s time to write some thoughts on how we’ve been doing at school (myself included because I go to language school). 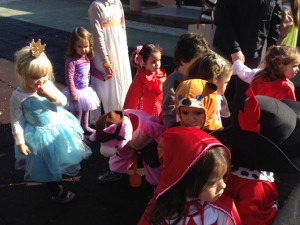 Some of Isla’s classmates having a school fiesta

Isla is in the first grade of Preschool. She started her school year in January. During the first month she was at school 2-3 hours a day because she didn’t want to use the toilet there. This continued until the teacher told me that we need to talk about the problem. She said that I don’t need come to fetch her on the break anymore because she will change Isla’s clothes if she wets them. I was sure the teacher wouldn’t notice Isla peeing in her pants because Isla never says anything if she does that and the teacher is pretty occupied all the time. But it turned out just fine. She hasn’t peed in her pants at school until now, but… she doesn’t use the toilet either. Good job on holding it in for five hours!

I worry about Isla not eating enough at school and not putting on her coat when she goes outside to play because the wind can be chilly sometimes. Apparently the teacher doesn’t check if they eat their lunch and if they have warm enough clothes outside. The kids really have to be independent at school. At school Isla has been practising numbers and shapes. She can now draw straight lines and colour thoroughly all the spots in the pictures. The teacher said that Isla doesn’t speak anything while she’s at school, but that you can see that she enjoys listening to stories and songs. Once Isla gets home the talking starts. She talks “Spanish” while playing and even to us sometimes, words like “todo”= everything, “toma”= take, “espera”= wait, “muy bien”= very good, “no quiero”= I don’t want and so on. She can count to ten and even say simple sentences. I think she might understand quite a lot at school already. 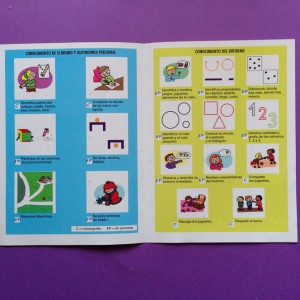 The past few months we’ve also been sick a lot, especially Isla. She catches the diseases from school and then infects the rest of us. Antti and Luna have suffered less of the diseases than me and Isla. We’ve had a stomach flu, flu with fever, eye inflammation and so on. Always when we’ve just started to get better, comes the next disease. So, Isla hasn’t really been able to attend school regularly. It’s sometimes harder to start going to school after a break because she doesn’t get into the routine of going to school at all. This week she has protested of going to school a few times. I’ve had to carry her kicking and crying. Usually she wants to go, though. They’ve celebrated some birthdays at school and Isla has liked that. They’ve eaten cake (and not their own food at all!) and she has brought home some boxes or bags of sweets.

Isla’s school report was kind of funny with all the pictures. It was divided into three parts: Knowledge of yourself, Knowledge of the surrounding environment and Language (communication and representation). There were only two grades: “conseguido”= achieved and and “en proceso”= in progress. According to the report Isla can: identify her body parts, draw the silhouette of her hard with help, share toys, collect the toys, wait for her turn, identify persons in the stories, recognise colours, use some drawing techniques and dance. The rest is still in progress. At this point there are more things in progress than achieved. 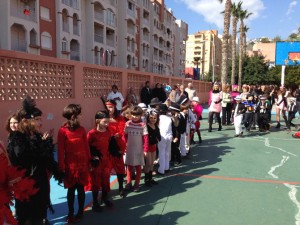 Luna’s class having a fiesta

Luna is in the first grade of Primary school. She has done well at school until now. She likes going there and has made some friends. She spends most of her free-time there with a Danish girl Milla and a Spanish girl Melanny. She says she likes P.E. and Arts the most. She also likes her Spanish classes which she has a few times a week with a few other foreign kids. Luna says that it’s sometimes boring to just to listen to the teacher talking, because she doesn’t understand Spanish that well, so she prefers the classes where she can do something on her own, like write or draw.

They do a lot of writing at school and if you don’t finish the amount of the work planned for that day at school, then you get it as homework. Plus there are sometimes extra papers for homework. Doing homework has been somewhat challenging for Luna, or not the process itself, but the starting part of the process. Sometimes, especially if there are a lot of papers, she does everything she can to delay the process. We’ve had a few arguments with her on the subject. But I agree that the load of homework is sometimes too much, even several pages (like 10) for the weekend, and especially for holidays.

Luna can speak quite well now. She speaks long sentences and usually says them correctly. Sometimes there are errors in the conjugation of the verbs, which are really tricky in Spanish, but anyway, you can understand what she is saying. She knows a lot of words too, some words that I’ve never even heard of. I wonder how much she speaks Spanish during her school day…but I guess a lot. Luna has started to use some more unpleasant words as well, like “tio” and “hoder” =damn, “que asco”= how disgusting, “que tonto eres”= how stupid you are and so on. So Antti doesn’t always understand when he’s blamed of being stupid…

Luna’s report for the second trimester was ok I guess, but some of her grades had lowered. Now, let me explain the Spanish grades first. This is what I found in Wikipedia: 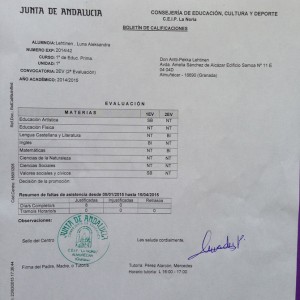 This is what Luna got:

In her Christmas report Luna had “sobresaliente” in Arts and Behaviour, now she got “notable”. Also she had “notable” in Spanish language and Maths before, but now she got “bien”. The only subject where there was some improvement was English. (Of course this English teacher is pleased about that;)) But all in all, her grades are good considering the language problem. The teacher said the notable grade in Arts is because she always draws the same thing, Elsa from Frozen. About Maths and Spanish she said that they’ve had more complicated tasks where you have to understand what you read, which is still hard for Luna. And about the behaviour grade; I guess once you get more acquainted with your classmates and understand what they are saying, you start to talk more and are not just quiet all the time like Luna was in the beginning of the school year. So I can understand why that’s now notable.

I recently decided not to study Spanish at the language school anymore. I felt like it was time for me to take a break and do something else for a while. I also needed the time to help Antti with his work during the days. I think I know the basic grammar pretty well right know but need to practise talking some more. And that I can do in the street. At the language school I felt I didn’t get the chance to talk that much. I would had needed more like a conversation course than the normal classes.

When I talk I can make myself understood. I am a bit slow still and some words just don’t come to me in a real life situations. I need more vocabulary and I guess that just comes to you naturally when listening to people, watching TV or reading. When I talk incorrectly I usually notice it just after I’ve said it, but then it’s usually too late to correct it. But I think I’ve got more courage to talk now and can do just well in everyday situations. So instead of the language school twice a week I now take classes in flamenco and sevillanas/rumba. Time to try something completely different than before I guess:)