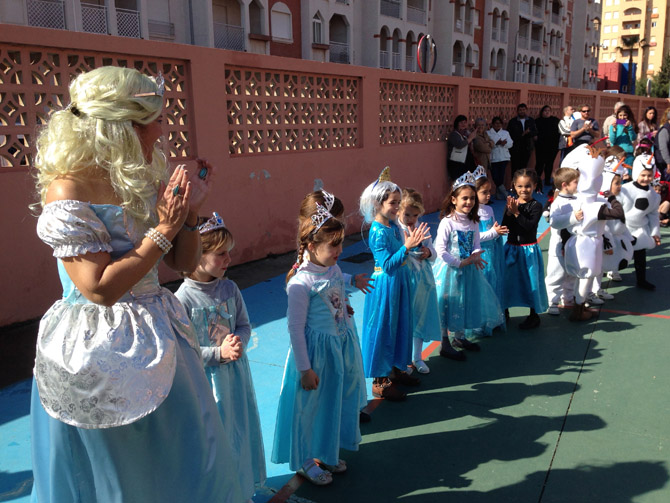 The Spaniards like having many fiestas a year. And so do we, now that we live in Spain. I already wrote something about the fiestas which we had last autumn, so now it’s time for the spring ones. 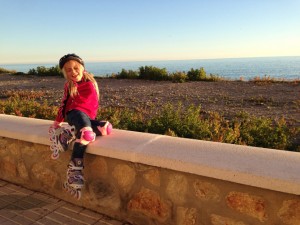 Luna with her brand new rollerblades

Luna’s birthday was actually the last day of December. During that day we celebrated our seven-year-old with the family by giving her a present (rollerblades) and by going to see a movie (Night at the Museum 3). We decided to celebrate her birthday with her friends later on when the weather would be a bit warmer. As we don’t have a lot of space inside, we rather wanted to celebrate outside in our backyard. We decided to rent a bouncy castle. I found out that it would cost 100 euros (a big one) or 60 euros (a small one). Luna wanted to invite all her female classmates (of course no boys). It was a bit tricky to decide exactly when we would have the party since the weather was somewhat unstable, the velocity of the wind could change in a minute and then it would be too chilly outside. We decided to celebrate on a Saturday in February anyway.

We invited around 15 kids, but only around 5 came. Many of them came a bit late. It was funny that the only one in time was a Finnish girl:) It’s usual in Spain that the parents come and stay too, so we had prepared quite a lot of snacks: donuts, candy, crisps, strawberries and something to drink. The kids had fun bouncing, but the wind started to be a bit rough, so two hours was definitely enough. In the end we had a “guest present”, a bag full of Frozen stuff for all the kids. 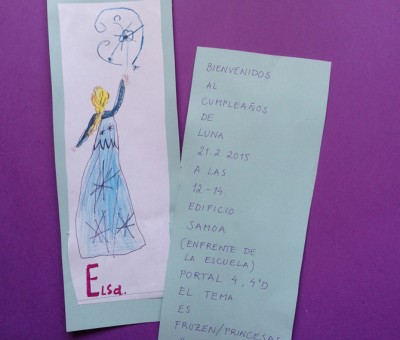 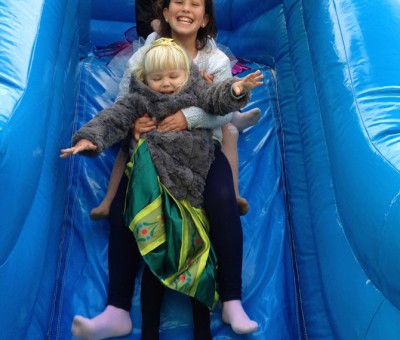 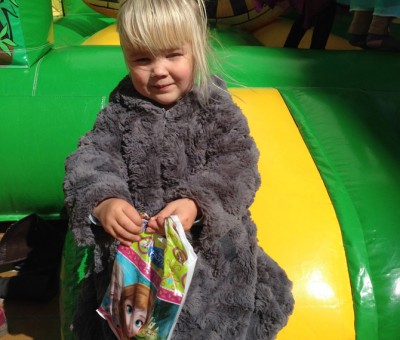 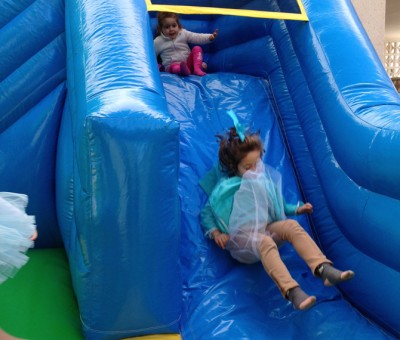 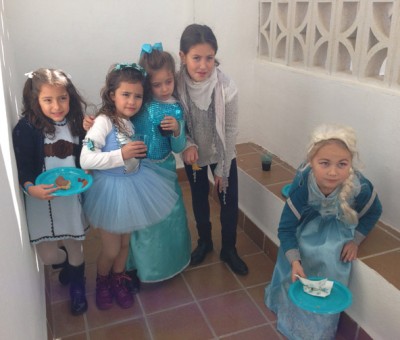 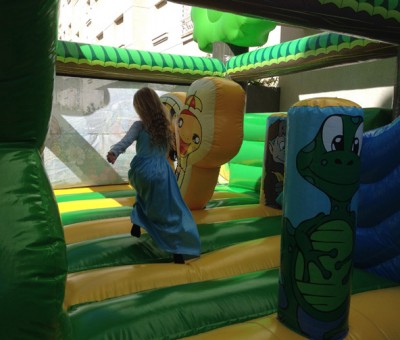 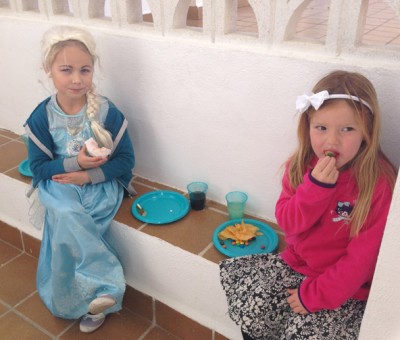 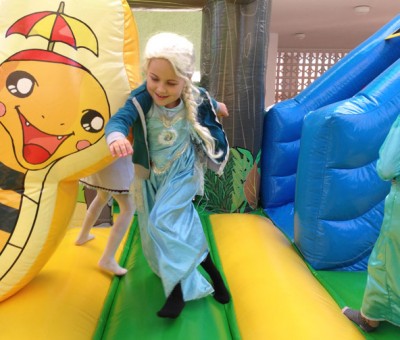 14th of February all the schools have masquerades (Carnevales) in Spain. All the kids are expected to wear costumes. This year our kids’ school had different themes for all of the grades, but the overall theme for the whole school was movies. The teacher of the grade decided the theme more closely. Luna’s theme was Cabaret and Isla had the different tales they’ve had in class. Of all the alternatives she decided to be a princess, of course. Most of the teachers and even some of the parents who participated wore costumes. There weren’t many who didn’t wear a costume. The Spaniards obviously take these things seriously:) During the day I actually saw quite many parents in town wearing a costume.

On the break all the parents were invited to the school yard. All the classes participated in a small parade in the yard. One by one, the grades marched in line for a short distance and the audience was applauding. Of course each class had a different music according to their theme. And when there are fiestas, music is always played REALLY loud here. There was one class in which all the girls were dressed as Elsas and the boys were Olafs (from Frozen). Luna was a bit jealous of them, because she would have wanted to be Elsa as well, but played her role with her sparkling costume really well. Isla seemed to be a bit bored of all the waiting. 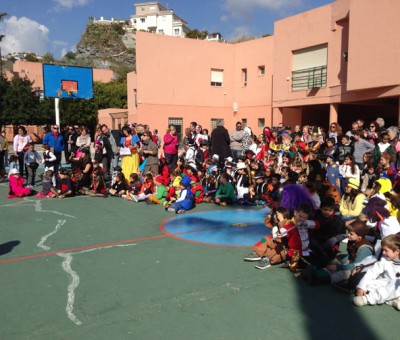 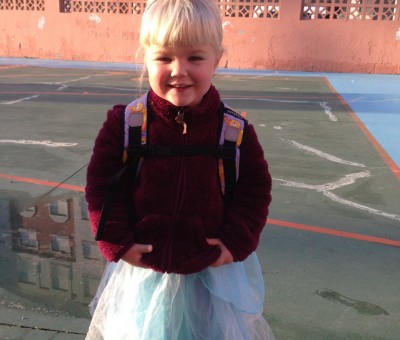 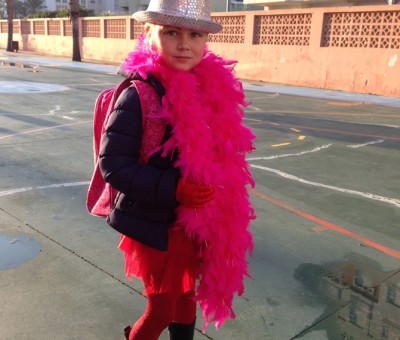 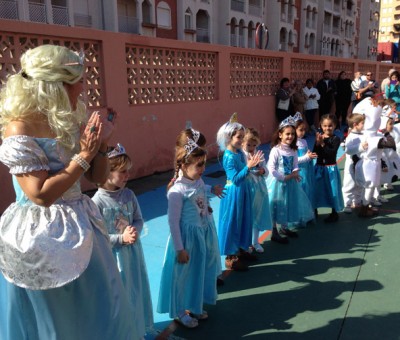 On the 28th of February all the Spaniards living here in the most southern part of Spain celebrate Dia de Andalucia. We were talking with my husband how funny it would be if in Finland we celebrated “Uudenmaan päivä” or a day for each of the regions/provinces. Here it’s a normal custom. I don’t know if the Americans have a specific day for each of the states in the U.S.A., maybe they do. The kids had a special day at school on the 27th, which was a Friday. They had made these flags of Andalucia, which they were waving while singing the song of Andalucia. Some pupils had prepared speeches, which they gave in the yard, the whole school listening.

We had almost forgotten how crowded this little town of ours can get when the holidays start. The Dia de Andalucia weekend was a reminder of that. We had planned to go to a restaurant in Salobrena, the next little town right beside this one. There’s this one restaurant on the beach we like. But…all the restaurants were already full. We searched and searched for a place which wouldn’t be crowded and in the end ended up in a really fancy restaurant, maybe the most expensive one in Salobrena. The restaurant was really nice, but the food wasn’t. After eating we went to this tivoli for a while. The kids went for a ride and we bought something little for them. Luna wanted to buy a mini guitar which she then used the next day when we went to eat out and to the beach here in Almunecar. She also dressed up as a flamenco dancer, so all the people who came across truly noticed the little dancer singing and playing while walking on the promenade. A multitalent she is.

Fiesta de San Jose is a local fiesta, celebrated around 19-22th of March in the honour of the guardian saint of La Herradura. Even though La Herradura is a smallish town next to Almunecar, the pupils also here had two days off because of the fiesta. It just happened to be a pretty bad weather during the fiesta, a lot of rain. We still wanted to check it out and luckily the sun started shining just as we went there, I think it was Saturday. There was a tivoli along the promenade, so the kids went to the bouncy castle. There was also a tent full of people and loud music, but we just peeked in and noticed that it wasn’t really for us. There were some women dressed in really pretty flamenco dresses, though. (I also want one!) So we went to eat beside the tent and ordered too much food again. We never seem to order the right amount of food, because it’s hard for us to guess how big the portions can be. And they usually are big. 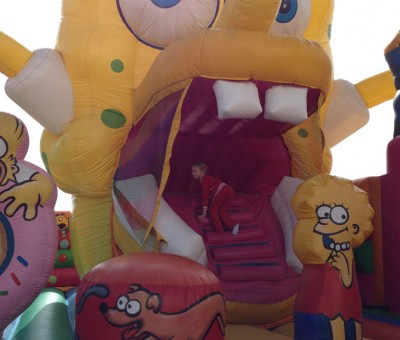 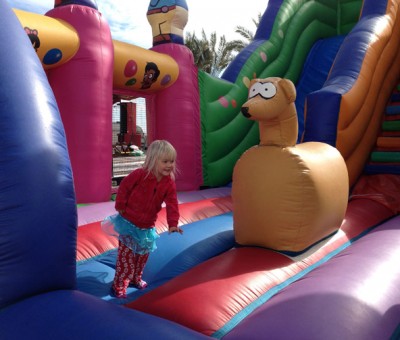 The kids have a week’s Easter holiday in Spain, so our little town got crowded once again during the Easter week. The weather was really nice during the whole week, the temperature being around 25 celsius all the time. So I wasn’t freezing inside anymore:) During the easter they have these religious parades in town at night. We didn’t go see one because it would have been a little late for us but we could hear the drumming coming from the parade many nights in a row. We had a three day family holiday in Malaga during the Easter. We had booked our favourite hotel there, called Silken Puerta Malaga. We like it because it has a small spa area (a hot tub and a sauna) which the guests can use free of charge. Both men and women can use the same sauna (with their swimsuits on), so we could all go together. There had never been people in the spa area when we used it before, but this time there was one couple. The hotel is quite inexpensive, around 70 euros a night. It’s a four star hotel.

In Malaga we went to see the old town. We walked along the streets and saw some nice shops. We found the indoor market and bought some strawberries and blueberries there. I found a nice flamenco clothes shop but it was just about to close. Also in Malaga the stores in the old town seem to close at 2 in the afternoon for the siesta, like here in Almunecar. We ate several times in an American restaurant in the mall called Vialia (right next to the train station), we so much like the tortillas there! The highlight of the trip, at least for the kids, was Disney Store which is in the mall called Larios, maybe 300 meters from the train station. There’s a lot of Disney princess stuff, so the kids were amazed. Isla got a big Ariel doll and Luna bought some Annas and Elsas with her own money which she got because of her good school report. 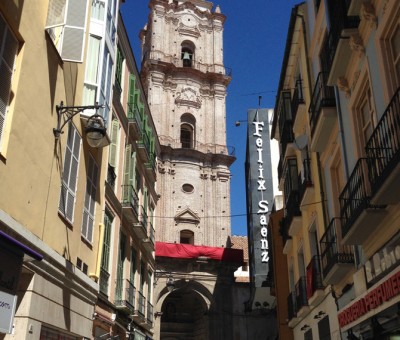 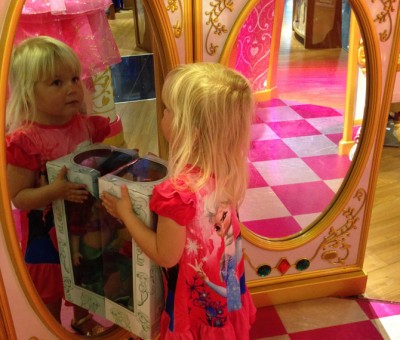 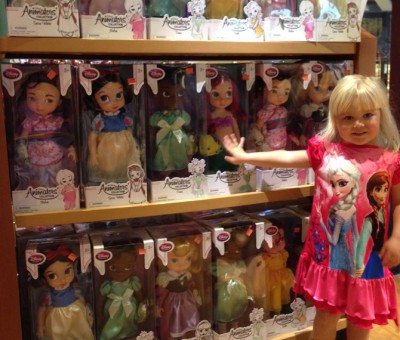 However, holiday can turn out to be a lot more exhausting than a normal school week. At least for the parents. At the hotel we had some restless nights when Isla woke up in the middle of the night and started screaming for an hour or so. She’s been doing the same thing at home occasionally, but there it was worse. I hope it’s just a phase. Spending a whole week with the kids all the time and planning activities for them was a bit tiring for me. Especially with Antti trying to work at home the few days after our little family trip and me trying to keep the kids calm and quiet. So I’m happy that the holiday week is now over and the normal routines started again.