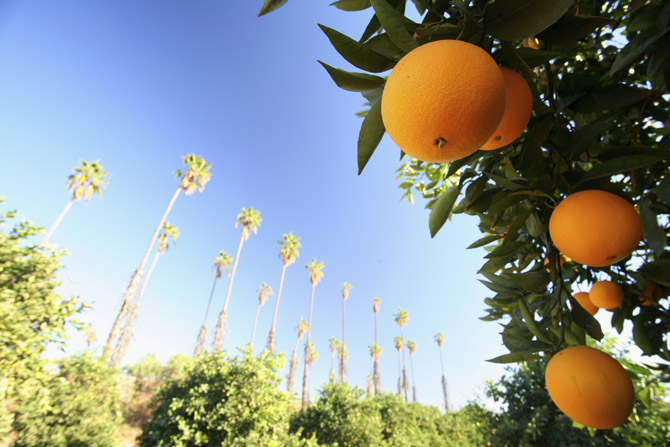 I already wrote a list of ten things that I’ve been missing from Finland since we moved here…but then I started thinking that I should also write a list about what is so good here in Spain, why we decided to go for Spain in the first place. So here it comes:

The weather is definitely number one! It’s warm all year round; the temperature here in Almunecar is at the coldest something like 14 and at the hottest around 33. In Finland I could barely wear my flip-flops during a month in the summer if I was lucky, but here it’s possible around 8 months a year! In Finland I didn’t like going for a jog in the winter because of the cold weather, here oh I just enjoy it! You don’t have to worry about sleet getting in your sneakers! I’m a person whose mood is affected by the sun, here the sunshine keeps me going every day. In Finland I used to sit inside during the long and cold winter, here I like being outside.

I love the sound of the Spanish language…even though I’m having a hard time trying to learn it, especially the verbs with all their tenses and the subjunctive. Spanish is however, quite similar to Finnish, because of its pronunciation. Most letters are pronounced the same way they are written. In my opinion Spanish is a beautiful language everyone should learn. Its really useful as well, many people in the world speak it. 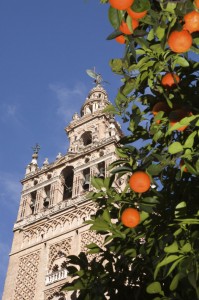 Attractions for everybody to choose from – a church.

There’s a lot to see in Spain. Beaches that will take your breath away, attractions for both adults and kids, cities with skyscrapers and shopping centres, desolete villages in the countryside, cascades and rivers, mountains, you name it. The terrain is fluctuating; here in Almunecar it’s possible to enjoy the sun on the beach in the morning and go skiing in the afternoon (in the spring). We really haven’t seen much of Spain yet, but we’re planning to see a lot more. For Christmas we’re planning to go somewhere else, a bit further along the coast. The weather is almost always good – so you can be outside as much as you want.

Moving to Spain can be a bit of a culture shock for people moving from Finland. Finnish people are quite silent and timid, where as Spanish people talk a lot and are more open and glad. When I’m out with Isla, she always gets many taps on her head because the Spanish people just adore kids (especially kids with light hair). They always shout “Que guapa!” (how beautiful) or “Que rubia!” (how light). The people here greet in the street and talk more easily to each other. You would never see Finnish people who are strangers to each other talking in a lift or a bus if they don’t have to.

The Spanish go out quite a lot. They love eating out with their families and taking part in different events. They don’t have as big a verge as we Finns to participate in things like dancing or singing spontaneously. (Or if Finnish people are eager to participate in such things, they are generally drunk.) The attitude towards living is different here, more relaxed and happier than in Finland. 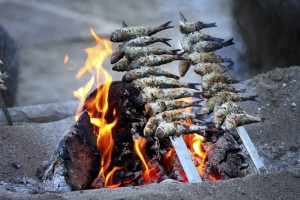 Living here is cheap compared to Finland. We spend maybe half of what we did in Finland on food. Plus the vegetables and fruits are fresh. And the fish! You can buy fresh sardines, anchovies or shrimps at a bargain price. Renting a house is a lot cheaper and if you want to buy a house, you get more than you would at that price in Finland. Everything costs less. The downside is that the salaries are lower than in Finland. That’s why many foreigners living here have their own business, like my husband. They prefer working on their own to get more income. Here you can also split your taxes with your spouse, even though the other one isn’t working, which is an advantage for us.

In Finland everybody is so focused on being busy. Many people spend hours and hours working and when they get home it’s already dark. Many people in Finland have this drive to accomplish more and more at work or in life in general. Here the atmosphere is a lot more relaxed. I mean, obviously people have to go to work here as well, but they seem to have this more relaxed attitude towards working. It’s ok if things don’t happen at the same minute. People here value their time with their family and are not that work-centered. 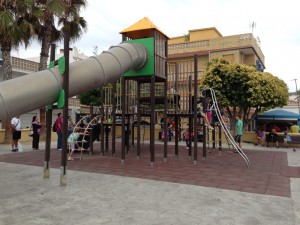 People in the park in La Herradura in the evening.

Family values are important for the Spanish people. They take care of their own. As young mothers go to work, the babies are left with their grandparents. And it works vice versa as well, you can see many adults pushing their mothers and fathers in wheelchairs in the evenings. I think it’s not that unusual for 20 to 30-year-olds to be living with their parents. During the weekends the Spanish people go to eat together and after that you can see them playing in the park together.
Author: admin
Categories: Almunecar, Eating, kids, La Herradura, Spain